Dealing  with children behaviors could be quite  challenging as children misbehave from time to time, in different circumstances and for different reasons, it could be quite  an obstacle especially in the classroom settings where lessons need to be taught and disruption isn’t great at all either for you as the teacher or for the other children. But as long as you have strategies for dealing with challenging behavior and understand the reason why it happen, then you can handle it effectively and with minimum disruption,

It is certain that you may necessarily not be able to control the cause, you should be aware of some strategies you can use for managing the behavior and below are some strategies that will really help.

Framing your words positively could oppose negativity which will have much better result, rather than saying what they ‘shouldn’t‘ it’s better they  are told what they ‘ should’ and this is not only applicable to children but also to adults for example children tends to react much better when they hear statement like ‘’Georges please use indoor voice rather than saying ‘stop shouting’ Georges.

Furthermore, when a child behaves in a typical  negative  way, identify the reason for their actions instead of telling them down, then discuss alternative way to tackle their actions, for example if they behave in a certain way because they don’t want to share their toys, establish a turn taking routine where they get lots of opportunities to take turns, they will soon learn to share, they will  learn that the ball will soon be in their court and thus will quickly pass it round so it will be their turn again.

Instead of completely trying to eradicate unwanted behavior, it will be best to focus on facilitating the behavior you want. identify what counts as good behavior and how you want them to behave then, work on ways to communicate it.

After identifying what counts as good behavior, behave the same way, be a positive role model as children often copy what they see. For example, if you want a child to use indoor voice when inside the house you have to do the same, don’t go about shouting when speaking to them, ensure what you do matches what you say and what you want them to do

Also you should be considerate of children’s  feeling, just as you want them to be consciously considerate of their friend and others, if you feel frustrated just as they sometimes feel ,act out the way you will like them to act when in such situation for example when frustrated you could say out loud  ‘I am overwhelmed right now and I think I should just take a sit and calm down, while you sitting you count 1 to 10 and then carry on, trust me when they see you do this they will do the same when in similar situation.

To ensure the class is running smoothly there must be  a set rules laid, which will help to guide their actions, you could sit together with children and set rules together, talk about the different type of behaviors that are acceptable and those that are not, let them know its not acceptable to hit their friends, let them know if it happen by accident they must genuinely say sorry and never do it again, discuss with them the acceptable behavior and let them know that they need to treat each other with respect. involving children in setting the rules will make its work as it will give them sense of belonging and commitment in following the rules. 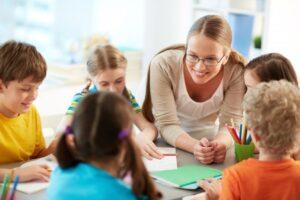 It is important to boost the moral of children especially when they have done things they don’t normally do, let them know you are proud when they behave appropriately, make it known and say nice words to them like ‘wow that excellent’, ‘oh great ,you such a good boy’, ’oh wonderful, thank you for doing that Sam ’.this words encourages them and boost their moral. In doing so other children  are more likely to behave positively so as to get a similar reaction.  you can also  employ using a reward chart as  children with challenging behavior tends to do well using this as they know they will receive a good job sticker,

for example when you have a child who likes throwing toys and messing up everywhere with toys  and not wanting to tidy up, use the reward chart, let him know that when he tidies up his mess he will receive a sticker trust me he will always try to tidy up as he know there is a reward for him. children with challenging behavior tends to do well using this as they know they will receive a good job sticker.

When you see a child behaving in an unacceptable manner, ensure not to shout at them in the front of their friends or in front of other children especially in a class as shouting will make them feel embarrassed about their behavior and as a result they wouldn’t want to listen to what you have to say next, instead use a glance or say something to them to make them know you can see what they just did and that it is not acceptable.

When dealing with children challenging behavior it is important you talk to parent about it, let them know their child has been misbehaving and ensure that they are carrying out similar  set rules you using at school for them at home thus the method will be effective in cubing the unacceptable behaviors both at home and in school thereby blooming the happy child we want.

13 effective coping mechanisms for stress as an early years practitioner

One Reply to “7 effective strategies of dealing with challenging behaviors”